Forbach in the Murg Valley 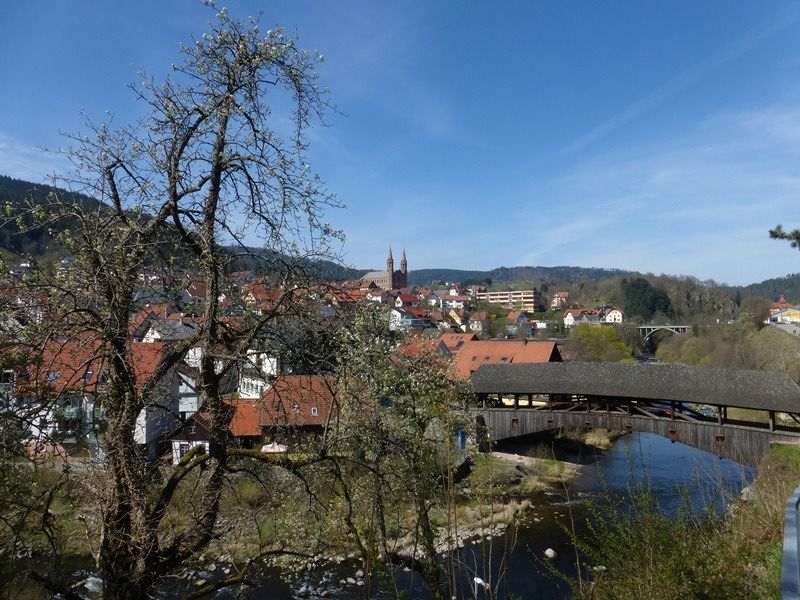 I somehow fell in love with this little place in the Northern Black Forest. Forbach is located in the upper, narrow part of the Murg valley among steep hills. The village occupies the slopes and terraces in a bend of the river. The catholic church is a prominent landmark. Views of the village are always landscape views: the river, the mountains, forests and meadows form an almost theatrical setting.
Forbach is another of those hidden locations hardly anyone has ever heard of. The name appears on the displays of certain KVV trams on the lines S 8 and S 81 because they end here, but that is about the only occasion it is ever mentioned.
Which is a pity, in fact. When I read about the wooden bridge I thought I should have a look at the place. This was a summer evening well spent.
And when I had a guest to show round a bit of the Black Forest on a sunny spring day, I picked the Murgtal line once more and started with a walk round Forbach again.

The Landscape of the Upper Murg Valley 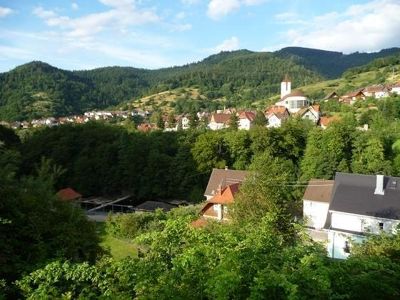 Photographers: The best views of the village landscape
can be taken from the helicopter landing in front of the hospital.

The higher upstream you travel along the Murg, the narrower the valley. Around Forbach the hillsides are steep, the river is deeply cut into the rocks. The villages have been built on the hillsides, at a distance from the river bank because of floods. In summer the rocky river bed has little water but at the end of winter when the snow is melting or after a heavy thunderstorm in the mountains this looks different.
The settlements are widespread into the side valleys. They are part of the landscape, the views change all the time when you move around. In the background another village appears, Gausbach with its prominent modern church.

As I learned from the theme path along the river, the landscape around Forbach looked different some decades ago. There were more meadows on the slopes. Now most of these are covered with bushes and young trees. In former times these meadows were used to make hay for the winter feeding of the cattle. In summer the animals were pastured in the forests, no the meadows. The hay was kept in small wooden barns out there among the meadows and transported to the stables in the village when needed. The slopes are very very steep and this was about the only way to make use of these grounds. 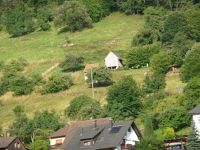 With the industrialization, less and less cattle was kept. The backbreaking work in the meadows was given up. Most of the hay barns have disappeared. However, nowadays efforts are taken to reestablish this cultural landscape. The meadows also have an ecological value as home to rare plants and animals and because they let fresh air stream from the side valleys into the village.
The meadows around Forbach are at least partly being cleared again. Hay barns are being repaired and rebuilt. Goats are the perfect helpers because they will eat any shrub or tree that dares to sprout anywhere. When the meadow is cleared it becomes a pasture for cows. They use a local race that is smaller and more robust (and produces excellent milk and beef). 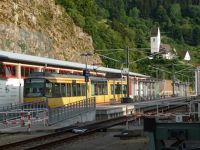 The little white church on the hillside opposite the village is probably the first striking building that you'll spot from the train station. It is sort of an outcast, but a self-conscious one. Forbach is a catholic village. In the 18th and 19th century very few protestants were here, for example forest workers, or later civil servants of Baden. They were taken care of by the parsons of Gernsbach. A local protestant community grew slowly; only since the 1950s they have their own parson. On the eve of World War I the protestants built their own church outside the village. Its location high up shows nevertheless: we are here. 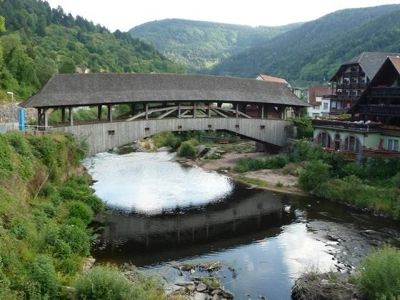 From the tram stop there are two ways into the village across the deep-cut river bed. There is, first of all, the large modern bridge with the main road. However, the prettier route is keeping left and following the smaller street down the slope to the wooden bridge. The most photogenic view of the village can be caught from this side, a few steps further uphill after passing the bridge - best in the morning with the sun in your back. Then cross the bridge to reach the centre of the village.
Wooden bridges with roof exist not only in Luzern... Forbach is very proud of theirs. This bridge, unlike the one in Luzern, can be crossed by car traffic. The original covered bridge had been built in the second half of the 18th century. 150 years later it had to be closed first for traffic and then even for pedestrians due to damage. In the 1950s a tough decision was made: take down the old bridge and reconstruct it from new wood. So strictly speaking the present bridge is not even 60 years old. An inscription in the middle under the roof tells about the rebuilding and the latest renovation.
This oversized bench next to the villageside end of the wooden bridge has been made from some tree trunks. You have to climb the steps to reach the seat, and then you sit like on a throne. The little furball in the picture is Russell the Wombat as size comparison. 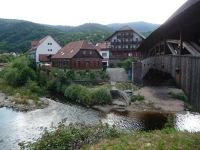 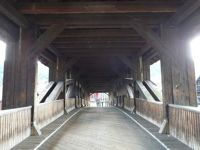 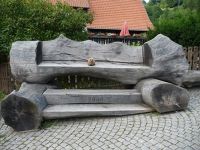 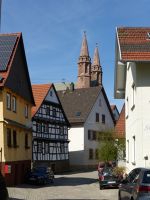 The village centre has many narrow streets and lanes and small squares, ups and downs, lots of well-kept old houses. Sidewalks only exist along the main streets, though, so watch out for traffic when walking the lanes.

The town hall is a rather plain building, i am inclined to date it to the 20th century. It is of interest to visitors because the tourist information is located in there, in room 1 in fact.

A funny detail: The mayor is named Kuno Kußmann. A guy with a big smile. Now what shall we think of a village that elected a „kissman“ as their mayor? Must be a friendly place! 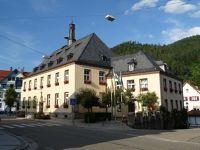 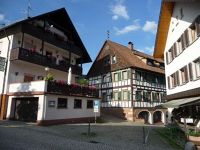 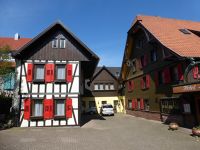 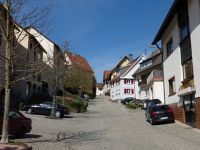 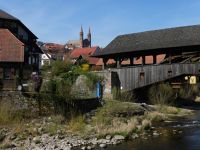 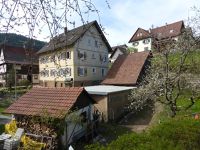 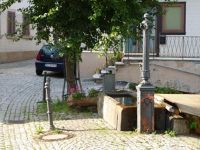 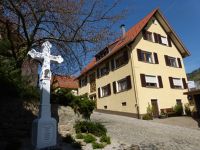 The village centre has lots of old fountains, big and small ones, that once provided the water supply for everyone. There is hardly a street without a fountain. Watch out for them. They are all different, some big, some small, some plain, some with sculptures, and all worth a photo. The water is running into stone troughs where horses and cattle could drink from. Some of these fountains have columns with stone sculptures of biblical figures. Finding the madonna on the fountain in front of the church is no surprise. The fountain opposite the town hall shows Moses with the Ten Commandments. The design of the little square is a modern addition: the water runs from the trough onto the pavement and forms a short „Bächle“. In a side street towards the wooden bridge there is a fountain with a neogothic fial, probably 19th century. I am sure there are more!

Another detail to look for in the streets are the religious monuments. Did I mention already that Forbach is a catholic village? Crucifixes and statues of saints have been put up in several places. These are usually private donations, witht he names of the donator(s) written on the pedestal. The wooden bridge of course has its statue of Nepomuk the bridge saint. It is not on the bridge, though, but on the villageside bank. Most beautiful in summer when he is surrounded by blooming roses. 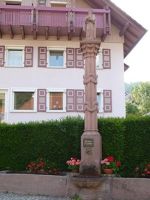 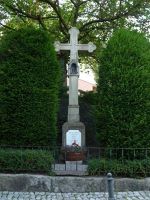 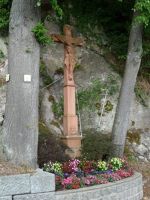 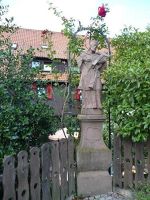 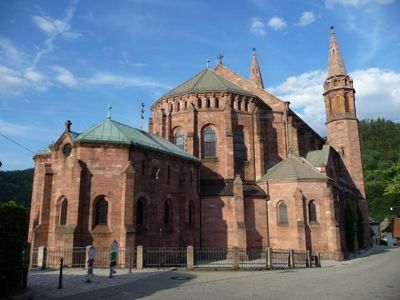 The huge neogothic church on the hilltop look far too big for a village like this. Its two steeples are visible from almost everywhere and make a landmark in the 'skyline' of the village. The church was completed in 1891 and shows the typical late 19th century neogothic style. The architecture is rather urban than rural. Directions are unnecessary because the church is impossible to miss. It is enormous. Looks as if they have picked the wrong plans for the wrong construction site...
The square in front of the church (that picture should better be taken in the morning because of the light) is part of the design. The terrain rises rather steeply. It ascends in a series of low steps that lead to the main facade with the steeples, and towards the stairs that have to be climbed to reach the entrances. A fountain with the Virgin Mary on a column is placed on the lower end of the square.
The church can be visited. The main portal is closed but the doors through the steeples are open in the daytime. All I was able to catch of the interior was a glimpse through the inner glass door because people were praying the rosary and I did not want to disturb. 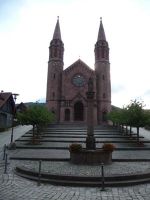 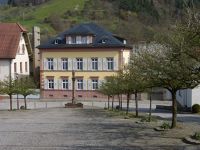 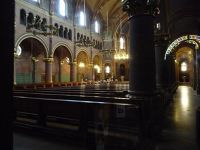 The cemetery is located behind the catholic church on top of the ridge. Black Forest people seem to grant their dead a resting place with a view, I have observed the same phenomenon in other villages and towns, for example Gernsbach.
The tombs on the cemetery are mostly modern - the usual rule that graves are taken away after 20 or 25 years applies here, too. Anyway, a walk over the cemetery is pleasant because of the views to all sides. The grounds look ultra tidy with gravel on all surfaces between the graves.
Photographers: in the afternoon the finest pictures of the church are to be caught from the entrance of the cemetery and from the hedge on that side. 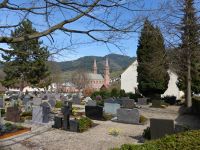 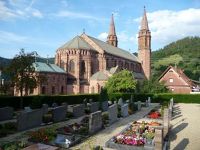 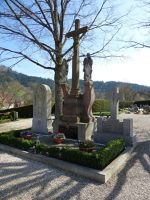 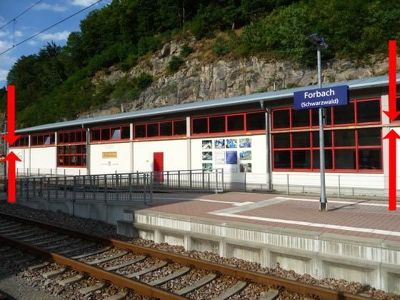 The arrows indicate the plank on the wall

Forbach, or in fact the adjacent village of Gausbach which is part of the municipality of Forbach, is the holder of a world record which is proudly presented at Forbach station. In 2010 a team of (hobby) woodcutters sawed the longest ever registered plank in one piece from a 100 year old tree trunk. The total length of the plank is 45.15 metres, which clearly broke the prior record of 40.81 metres.
If you are waiting for a tram and bored, you can admire the world record plank on the wall of the tram garage. It is attached along the bottom of the windows. The entire length did not fit into the photo, there are a few metres missing on the right. There is a board with some photos of the event and an explanation which is easier to notice than the plank itself. 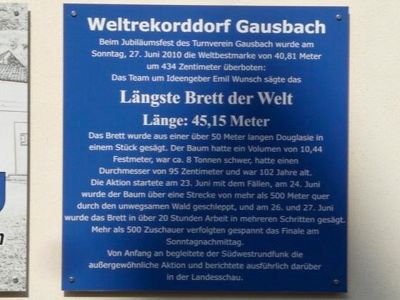